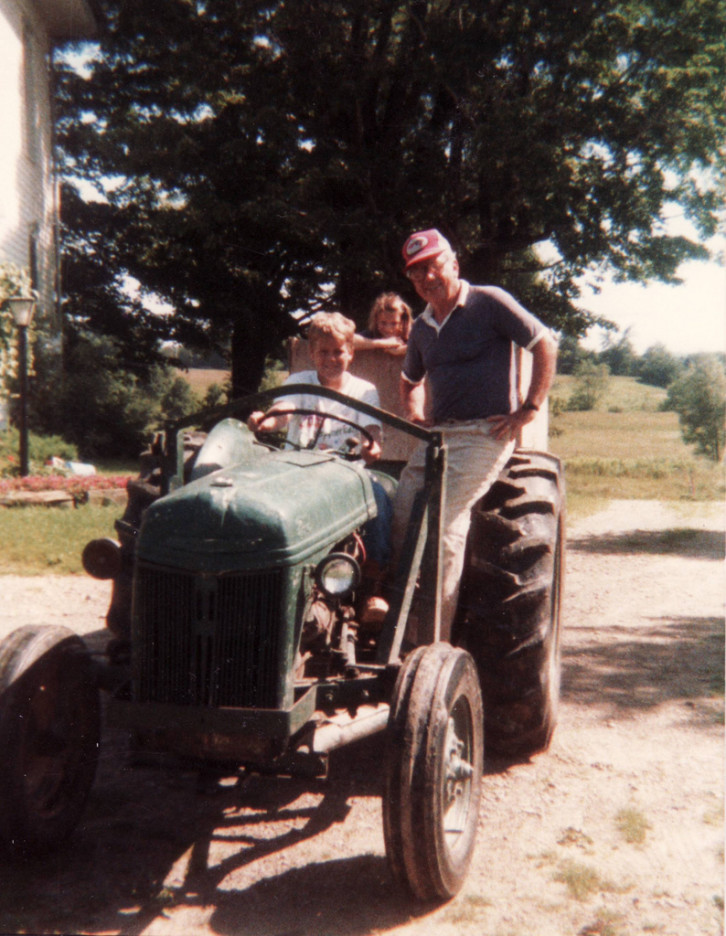 I want to start with a quick story. My mom’s dad had 4 daughters. He was a man’s man, fought in WWII, hunted, fished, worked insanely hard for his family, and held to a set of values that today would be labelled as sexist. My grandfather once insisted I turn off Growing Pains because it was too adult. You know, the family show in the 80s starring the notoriously Christian Kirk Cameron. I was his first male grandson and of 8 grandchildren, only two were male. I was given a special kind of attention that I think came from a man who desperately wanted a son and now found that chance in a grandson. He taught me to shoot a gun at an incredibly young age, he took me hunting, trapping, fishing, gave me gifts of guns he brought back from WWII, and let me do things he had not let his daughters do. Like drive a tractor. He had been a small grocery owner but when he retired he bought a small farm in upstate New York with a quite little brook and land for hunting and his horses. Each summer my parents would send me there for a week or two alone with my grandparents and it was a little heaven. I was given free reign to hunt, fish, ride horses, swim in the creek, and generally have experiences that I would only later realize how special and unique they were. Each Christmas all my aunts, uncles, and cousins would get together for what I can only describe as Normal Rockwell-esque and perfect holiday filled with roasted chestnuts and clydesdale drawn sleigh rides. One one such Christmas holiday we went, as was our tradition, out to the far reaches of my grandfathers farm to find a real Christmas tree, cut it down, take it to the house, and decorate it. This particular year, my grandfather was teaching me to drive the tractor. An old, green relic that only an older generation would expect to still run. I won’t bore you with the complexity of the green machine, but I will say it is harder than any stick I have driven since, which is saying something. Now with some practice under my belt, my grandfather was giving me the honor or driving the two aunts and several cousins on our yule tree expedition. Let me tell you about these particular two aunts. On the spectrum of conservative to liberal, they were both on the far end of liberal. To give you some idea, one had told my grandfather in the mid sixties that she was moving in with or sleeping with a man, out of wedlock, and this man was black. Today that would not even register on most people’s liberal scale, but at this point in time, it was scandalous in the extreme. These two liberal aunts started chanting “we want a woman driver” and all my female cousins quickly joined in. It was one of those little things that was meant in good fun, but later that day as I thought about it I found it made me a little pissed. I felt this double standard: on one hand I had aunts that wanted me to open doors for them or take their luggage to their rooms or mow the 2 acres around my grandfathers house, but then when it came to doing something they wanted to do, they changed tune and wanted equality. Not long after that I went to run an errand with my grandmother and we got to the door of the store and she stopped to let me open the door for her. This was probably my pre-teen or early teen years and I was probably through an age where I acted the ass, but I decided in that moment to take a stand against that double standard and stood defiantly for her to open the door for herself. Now thinking about this moment I am in awe of her wisdom. She knew exactly what was going on in my mind and something like, “Is that the world you want to live in? Where men don’t open doors for women? Because with that comes women that aren’t feminine. You can manifest the world you live in and it starts with you opening that door.” I don’t remember exactly what she said because at the time I had no idea how profound the wisdom was she was dropping on me. Pearls! Pearls! Pearls of wisdom!

Today in the paper I saw that that Defense Minister Ash Carter has allowed women to serve in any role. Up to know, women have not been put in front-line combat positions. This is happening at the same time that the UFC has changed their position on female fighters and has allowed women to fight in one of the most, if not THE most brutal and violent sports that is legal in this country. At the same time as Shelby Osborne playing football for a college team. I think there is a big difference between pushing for equal pay or leadership positions in business and putting women in harms way or having men put in a position where they need to hit a woman. I can’t help but think of the poor guy that has to hit a female quarterback because his scholarship rides on his performance and his performance is measured by his ability to hit the quarterback as hard as he can. How long until the UFC decides the best fight is going to be to put a championship female fighter against a championship male fighter? If a woman can be a QB and take hits from men, is it much of a step for a woman to take hits from her male UFC fighting counterpart? And if a woman can take hits from a man in the ring, is it much of a step that a woman should take hits from a man out of the ring? Is that the message we want to tell our young people? That women can take hits? That it is ok to hit a woman? How far will we go in the name of equality? I get that as a man that I can not appreciate the frustration that women feel just as I can’t appreciate the racism minorities feel. I realize I take for granted the job advancements that have come so easy, the male only poker games I have been invited to, or the “guys night” events that have led to opportunities. Until you walk a mile in those shoes, or high heals, one can only guess. Far be it from me to be one more obstacle blocking women from getting the credit and respect they deserve. I just don’t see how letting women be put in harms way, playing in violent sports, or getting hit furthers their mission for respect. What do I know? Someone will probably make a point that will lead me to quietly remove this post some time from now. Until then I am going to continue to open doors for the fairer sex.

The rise of delivery as a service
Scrapped