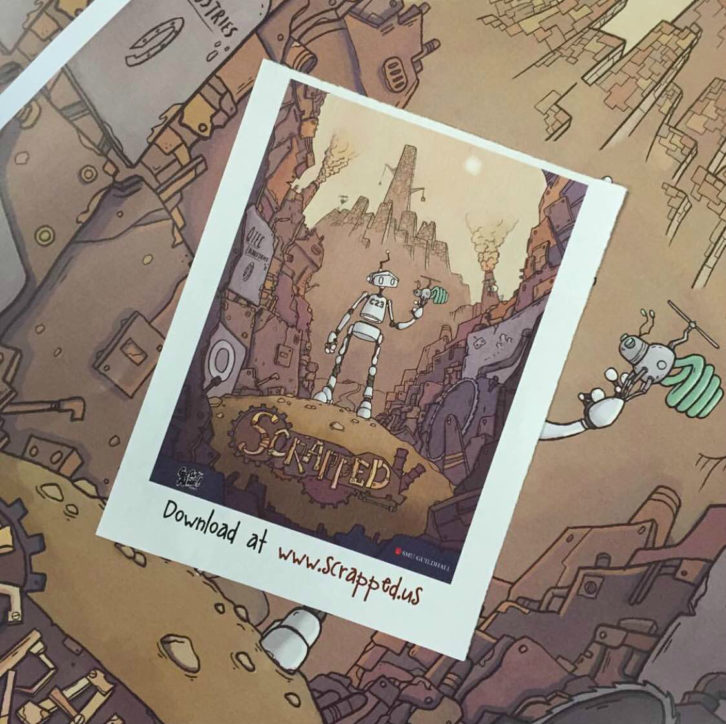 Today wrapped up Dallas Startup Week. I went to the Game Day, which was the final session of the Video Game track. There were several really cool games and gaming technology being demoed and I was surprised how many video and board games are being developed in Dallas. There was one in particular that caught my attention: Scrapped. Scrapped is a game that was developed as part of a project in the SMU Guildhall program.

So instead of reading my description of the game, you should download and play the game for free. You can complete the game in one sitting. You play the robot C23, which is built in a factory but then is Scrapped because it does not meet some criteria. Once scrapped, you learn that there is a paradise of free robots and your job now is to find your way to that paradise. In other words, being scrapped turns out to be a great thing. Instead of being a robot slave doing some mundane task indefinitely, you are now going to join others and live in paradise. You don’t kill anyone or anything. You don’t try to beat others. You are just using your robot powers to overcome obstacles and get to the goal.

The game is beautiful. It is easy to understand while still challenging enough to be fun to play. The game mechanics, or the robots powers, make sense and are easy to understand and as you move through the game, you use them in different ways. It’s an all around really cool game. The reason I really like it is that I am dyslexic. Dyslexia, according to Wikipedia, “also known as reading disorder, is characterized by trouble with reading unrelated to problems with overall intelligence.” While people usually focus on the deficiencies of dyslexics, they are also known to have above average math abilities. I don’t know if this is common among dyslexics, but I am in the 99th percentile for visual-spacial problems. Albert Einstein and Thomas Edison were also thought to be dyslexic. I was diagnosed very early on with dyslexia and felt “scrapped” by my first school and ended up in a school for children with learning disabilities. In this way, I really related to the game’s hero. I felt that frustration when first getting scrapped. Why? What’s wrong with me? Did I do something wrong? But then was excited to learn that this was a good thing! I could join other’s with the same problem in paradise and skip slavery all together.

After playing the game, I sat with Marcelo Raimbault to discuss SMU’s Guildhall program. He is from Brazil, where he has his own video game business. He felt that even though he had a good deal of experience, Guildhall is a great program where he learned a lot. In fact, his only complaint was that the program was too demanding. The group project also sounded really interesting. Instead of being stuck in one idea, as teams work on projects, they gravitate to other projects they think work better. I know this: the project I played was really impressive.