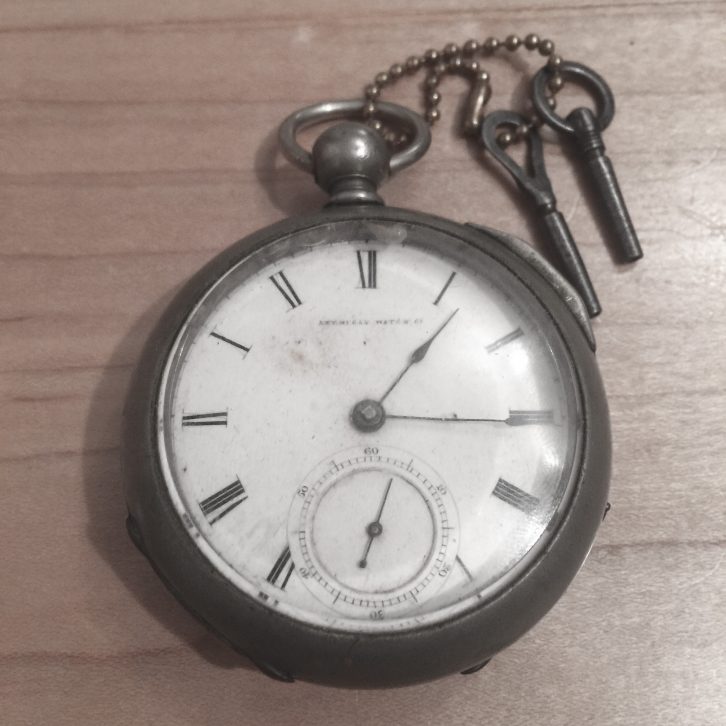 My grandfather, Paul Bunnell, passed away last in February of last year. A few of his effects were passed on to me including this old pocket watch. The watch does not seem to work, but I have been told it is fixable. You can see details about this and other pocket watches on this site. It seems to have a cool history and I wish he told me how it came into his possession. The watch was model 1857 and estimated to be produced in 1859 or 1860. So about 160 years old. The total production of this particular watch was about 800 units. The movement contains 11 jewels, which is named after Royal E Robin who I discuss below. It is not considered to be “railroad grade“, which is a type of chronometers pocket watch that keep extremely accurate time despite changes in climate. In fact, there is a fantastic book about the development of the chronometer to solve the mariners problem of longitude in the book Longitude: The True Story of a Lone Genius Who Solved the Greatest Scientific Problem of His Time, which I read in 2015.

The American Waltham Watch Company was based in Waltham, Massachusetts and produced watches from 1852 to 1957. So this watch was definitely one of their earlier watches. Waltham is about 10 miles west of Boston. Of course the factory has been converted to lofts, but cool enough, the building still stands.  American Horologe Company, who went bankrupt and was sold at auction to Royal E Robin, merged with Waltham in 1857. Horologe was started by 3 men who wanted to make less expensive but still high quality watches by making interchangable parts. This was the same strategy employed by Henry Ford in 1903 to make a better automobile and his legacy needs no commentary. This watch was designed around the time of the merger and the movement was named after Royal E Robin, who was also the company’s treasurer until his death in 1902. At the time the watch sold for about $12, which was a pretty good sum. If you assume that $1 dollar was equal to one ounce of silver (because the US dollar used to be tied to gold and silver), then this would be about a $300 watch. That company went through some hard times as the Civil War broke out in 1860. Interestingly Abraham Lincoln owned a similar watch made by Waltham Watch Company of the same size and number of movements that was made in 1863, just 3 years after the one I have. You can see a more complete history here.