The Best Trick I Ever Saw 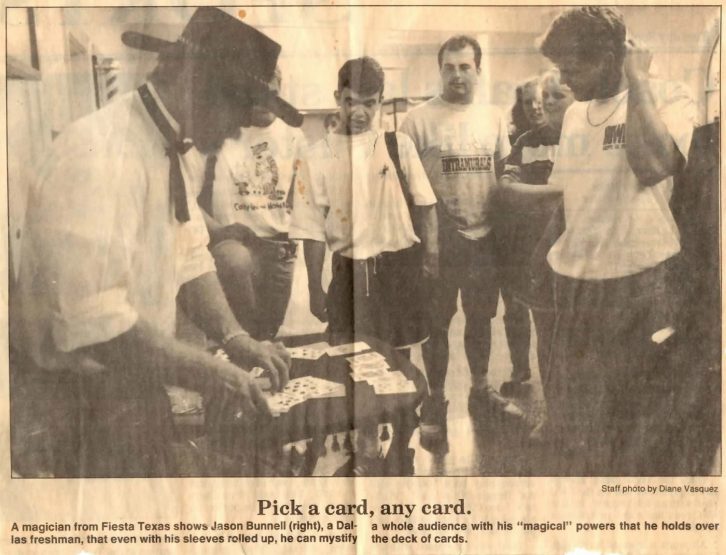 The best trick I ever saw was my freshman year of college. A card shark wanted to show how old riverboat gamblers cheated at cards. The thing was, I didn’t know the real trick until last night about 25 years later. An Austin director made a documentary on that man, Richard Turner. BUT WAIT! Don’t watch the preview just yet! It wasn’t until I watched the preview that the true magic was revealed.

When I saw this man perform at Baylor, they put a picture of it in the paper with my name, so I kept it. He said he wanted people to see how old riverboat gamblers and professional cheats did it. He said he could tell what the cards were by weight. He said he could feel the difference in weight between an 8 of clubs and an 8 of spades. I figured there must be more to it than that, but I could not see it. Maybe there was a slight difference in weight from ink, but it would have to be so minuscule as to be impossible for the human hand to detect. As a kid, I had a magic set and thought I might catch him with misdirection. He did some other tricks where he asked if people had business cards and would count them and get a feel for them, hand them to another, and ask yet another to remove some cards and by weight would say how many he had left. There were a number of variations of that, but it just didn’t seem like a trick of misdirection or typical card tricks. I found a YouTube video of Richard doing a card routine. See if you see anything strange. Don’t try to solve the trick, just see if you can spot anything odd or a little different about the man himself.

Did you spot it? I was right in front of the guy and I never spotted the best part. It is far more amazing than the card tricks he was able to do. The real trick is how he is actually doing them. I did not see the premiere of but heard about it. On the site, you can see a little about the real magic. Go check out the preview at the Dealt movie site. Truly unbelievable. Just more proof that our disabilities make us greater and greater still. I have dyslexia and though not as challenging as blindness, it did have a huge impact on my life and I feel I have adjusted to those challenges and those adjustments have made me stronger. I think Richard is a great example of how people can do amazing and unbelievable things with their disables.