The Art and Science of Remembering Everything 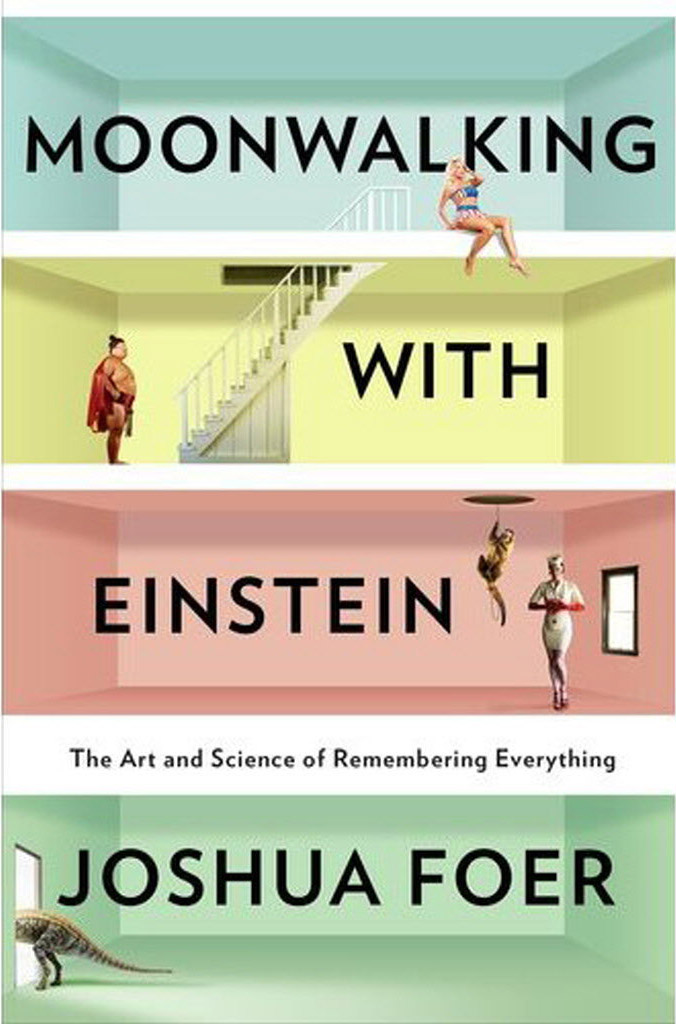 I just finished the book Moonwalking With Einstein – The Art And Science of Remembering Everything by Joshua Foer. I enjoyed the book, but would only give it 3 out of 5 stars. Unlike other non-fiction books like The Code Book, I felt this book did little to actually show you how to do a lot of the things discussed in the book, which was what I really wanted. This was really little more than a man talking about his experience with learning how to improve memory. I wanted to briefly describe the methods mentioned in the book but also comment on a few concepts that I thought particularly interesting.

The Method of Loci basically uses rooms you are familiar with and furniture in those rooms, and simply placing the items you want to memorize on these items of furniture. It is also called the Memory Palace Technique. A great video shows a two time US Memory Champ Ron White teaching a 6 year old this method to memorize all the US presidents in an hour. Ron White, the man from the linked video was also on Stan Lee’s Superhuman show on the History Channel. He also has a fantastic YouTube channel that teaches several memory techniques. What is interesting is that everyone that has learned memory systems like the Loci Method insist a person of average intelligence could do it in a few minutes of practice. In fact, Ed Cooke, who first taught the author the Loci Method, says he thought someone could win the US Memory Championship with just a few hours of practice a day. And that is exactly what the author does. Another application of this same technique was by Dr Chooi where he used is own body as the Loci to memorize a dictionary! “Dr. Yip Chooi, the effervescent Malaysian memory champ, used his own body parts as loci to help him memorize the entire 56,000-word, 1,774-page Oxford Chinese-English dictionary.”

Another method described is the Person Action Object or PAO method. This method is used to memorize numbers. For each digit from 0 to 9, one would have some person that is very memorable. And it is best not to use close friends or family. Santa Claus is a better option than your mom unless you want to picture your mom doing unspeakable acts in order to memorize a number. In addition to having 10 people for each digit, you would do the same for actions and objects. Lewd, silly, or gross is better than normal because they are more memorable. So maybe you choose Santa Clause to represent 7 because Christmas is on the 25th and 2 + 5 = 7. Farting (the action) is a 4 for no particular reason. And the object for 9 is your dream car: a cherry red 911 Porsche Turbo. So if you needed to memorize a phone number starting in 749, you would picture Santa Clause farting on a cherry red Porsche INSIDE your mailbox (or whatever is your #1 position in your Loci). Then perhaps Marvin the Martian is puking on your laptop right on your driveway (your second Loci position). And so on.

I am not sure the last method was really given a name, but ironically it was to remember names. But the idea was to have a picture associated with the most common names. If you sign up for an email, you can get a list of the top most 100 male and female names with great images for each from Ron White, the link is in the notes of this video. So if for the name Jason, Ron’s picture is a jaybird in the son. If you think my most memorable facial feature is my nose, then you would picture a jaybird pooping on my nose with the sun burning the poop or something. So the next time you see my, you would likely laugh remembering a jaybird pooping on my nose with the sun burning it but then instantly you would go….”Jason!”

Trade Off of Genius

One of the topics the author talks about extensively are cases where people have amazing memories with no method. Every single time, the person with the amazing memory has some issue with the brain. Sometimes it is head trauma or it may be a “defect” the person is born with. I have heard the basic idea before. You hear the same thing with people that can calculate big numbers. They usually also happen to have some corresponding deficiency. Rosie O’Donnell had a great line in a crappy movie called Beautiful Girls where she said, “You’re both fucking insane. You want to know what your problem is? MTV, Playboy, and Madison fucking Avenue. Yes. Let me explain something to you, ok? Girls with big tits have big asses. Girls with little tits have little asses. That’s the way it goes. God doesn’t fuck around. He’s a fair guy. He gave the fatties big, beautiful tits and the skinnies little tiny niddlers. It’s not my rule. If you don’t like it, call him.” Apparently intelligence works the same way. Einstein probably didn’t understand simple social etiquette. Mozart probably couldn’t count without using his fingers. And that guy from high school that aced the SAT probably thought Moby Dick was about a big fish that got away. God’s doesn’t fuck around. He’s a fair guy.

There was one person he interviewed multiple times. It was someone that claimed and had been diagnosed as a savant, but the author suspected had actually learned many memory methods. Ultimately he questions if it matters. Then he asks which is more impressive: if he was a savant or if he taught himself these techniques. I think learning those techniques is very impressive, but, obviously, lying about how it is done is wrong. I imagine the only reason people study savants is to try to understand if we can induce, recreate, or learn to improve memory in some way and someone that lies about how he accomplishes his memory feats is the fly in the ointment of research.

The book reminded me of a documentary called Koran by Heart where young students memorize the entire Koran by heart. That would be 77,439 words to the entire Koran. To put that in perspective, that would be very close to the 79,976 words in the Torah, or the first five books of the bible. Like the Koran, many Jews have memorized the Torah. From the book:

One of the last places where this tradition of recitation still survives is in the reading of the Torah, an ancient handwritten scroll that can take upward of a year to inscribe. The Torah is written without vowels or punctuation (although it does have spaces, an innovation that came to Hebrew before Greek), which means it’s extremely difficult to read. Though Jews are specifically commanded not to recite the Torah from memory, there’s no way to read a section of the Torah without having invested a lot of time familiarizing yourself with it, as any once bar-mitzvahed boy can tell you.

I like the idea of trying to memorize the Torah. It is clearly possible as many people have done it already. Foer cites 18th century Dutch poet Jan Luyken, “one book printed in the heart’s own wax / Is worth a thousand in the stacks.” Who doesn’t want to write the bible on the heart’s own wax?