Why Edge of Tomorrow is great and misunderstood 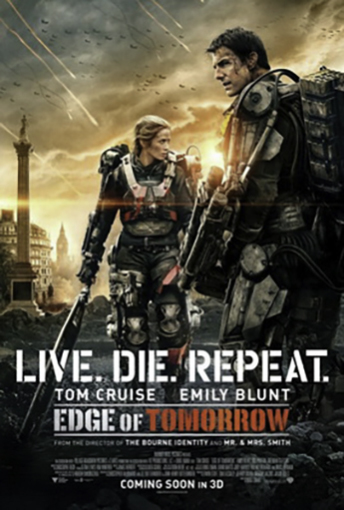 Let me get right to the point.  I think the aliens won.  This is a great movie.  Everyone is comparing it to Groundhogs Day because of the time loop, but it also reminded me of the book Ender’s Game.  The reason it reminds me of Ender’s Game is because the aliens are looping time for a reason.  Why are they looping time?  To refine their strategy.  By starting over, they get to correct their mistakes.  This advantage is passed through blood to Tom Cruise as it had been on Emily Blunt previously.  She used that advantage to win a decisive battle.  But there is an important plot point that I think a lot of people are not really considering.  Emily Blunt and Noah Taylor (Dr Carter, the weird scientist) believe the aliens intended to lose that battle so that 1) the humans would believe they could win and 2) they would pour all there forces into a combined effort so that they could eliminate the insurgency in one effort.  There is another plot point I think people are overlooking.  The aliens had a plan in the event their power was passed to their enemies.  Do you remember that?  They gave false visions.  They showed that the Omega was in Germany in or around a damn, which they later realize is not so.  It is actually in the Louve.  But something unexpected happens when they kill the Omega.  Tom Cruise is killed in the successful attempt on the Omega.  And time resets.  Obviously the twist is we expect, since the Omega died, that they would  continue on.  But not only does time reset, it resets at a different time period than it has throughout the movie.

I would suggest that killing the Omega was indeed a big blow to the Mimics, but not fatal.  Presumably this isn’t their first rodeo.  They can control time, after all.  So they reset.  That is actually bad news for humanity because this time and each consecutive attempt will fail since the Mimics will refine their strategy.  That is, after all, the whole reason they loop time.  This time, as like in the first battle when Emily Blunt loses her ability to loop, we can only assume Tom Cruise has also lost his, losing their strategic advantage over the Mimics.  Strategically speaking, if you held the bulk of Europe, you would place your critical chess piece, so to speak, in a better protected position.  If in water, deeper.  And you would prepare for an attack regardless if you thought it was possible.